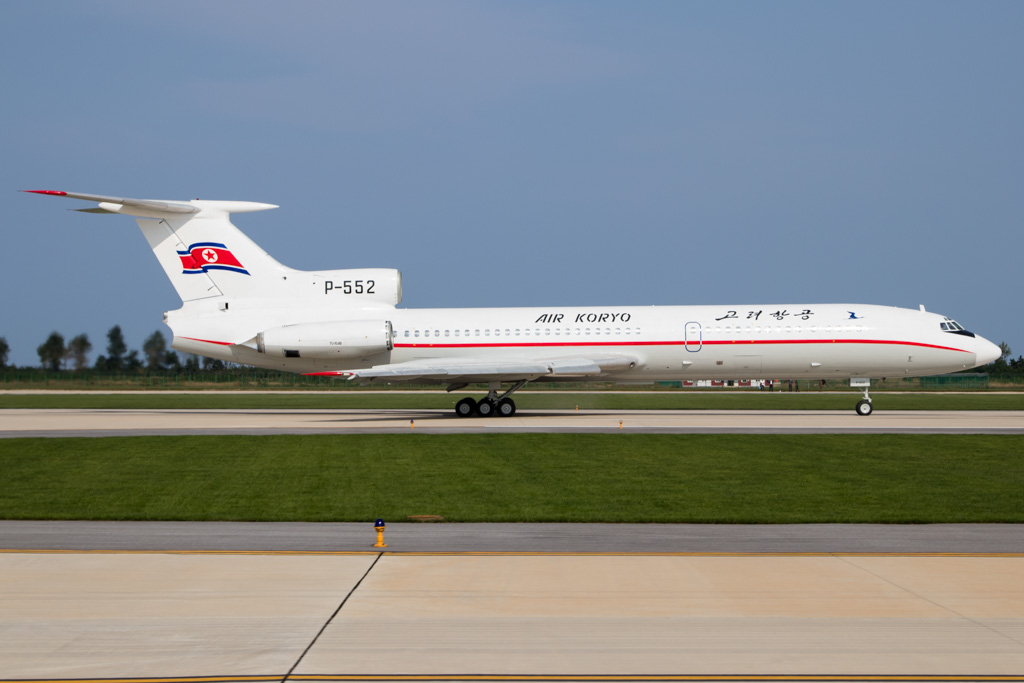 The Air Koryo Tupolev Tu-154 departing for its joyride shortly after the Il-76 one finished.

The lunch break was very short, since in about 30 minutes, it was time to board another aircraft, the An-24.

There were about 30 passengers onboard and by the time it was my turn to pick a seat, only a “windowless window” seat was empty. That was not a problem, however, as shortly after the 1458hrs take-off, the passengers started switching seats and everybody had a chance to look out of the window. 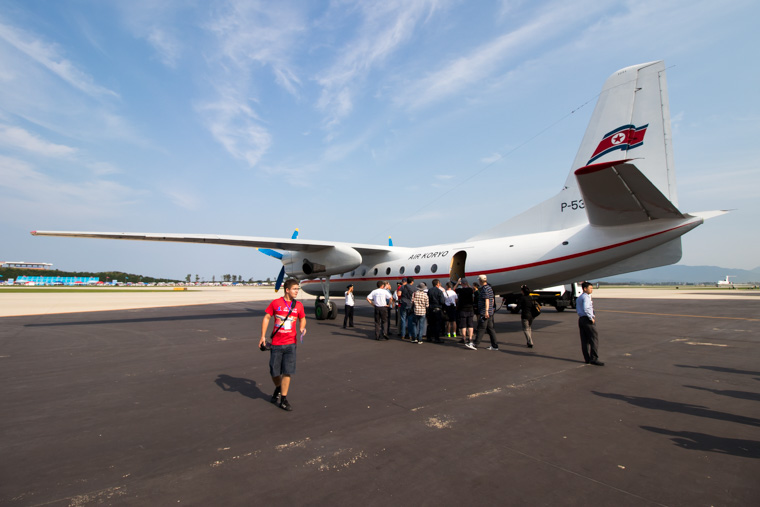 Boarding of the An-24 joyride in progress. 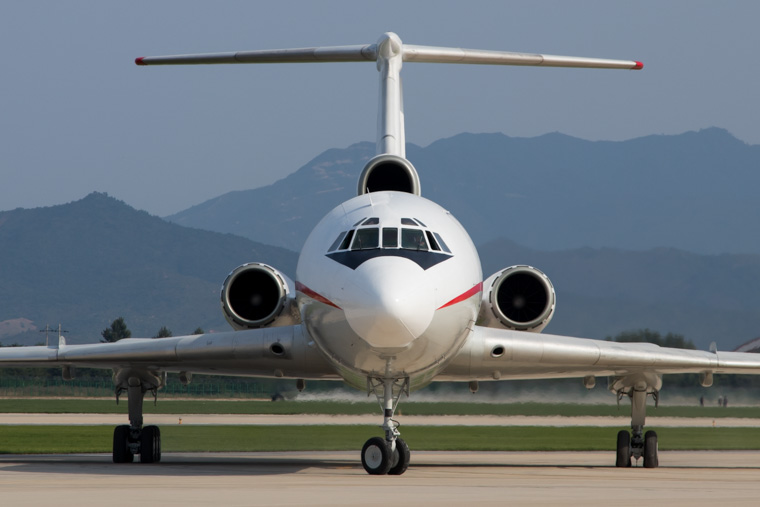 While the An-24 was boarding, the Tu-154 arrived from its joyride. 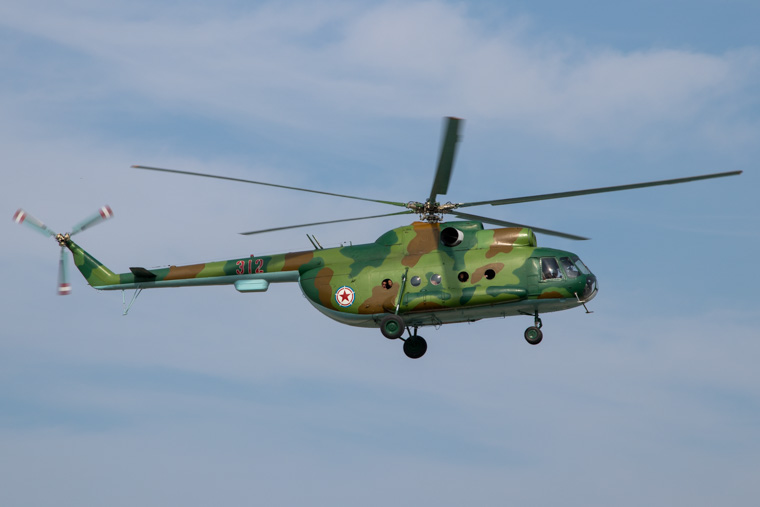 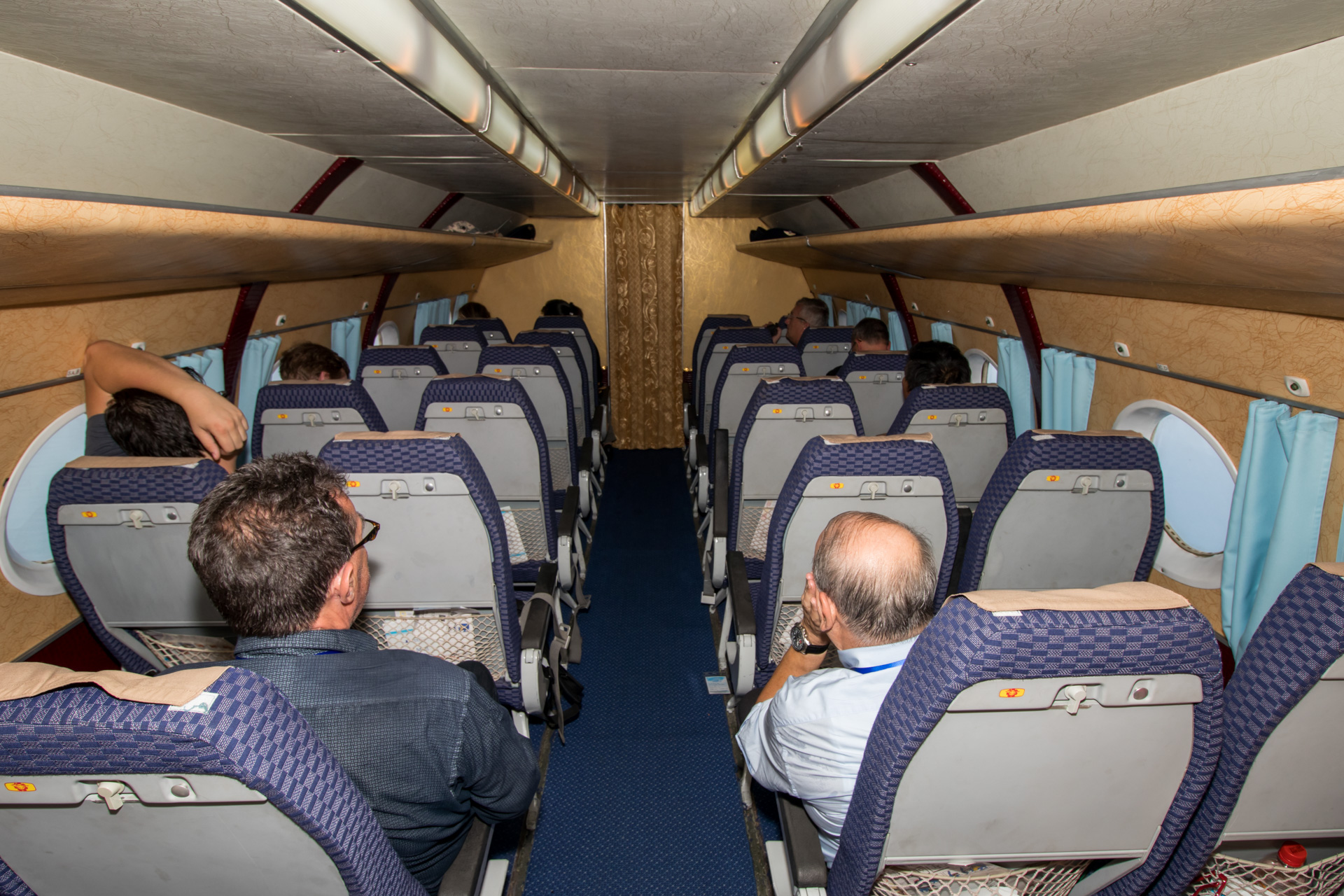 The retro cabin of the An-24 was not very comfortable due to its extremely hot temperature. 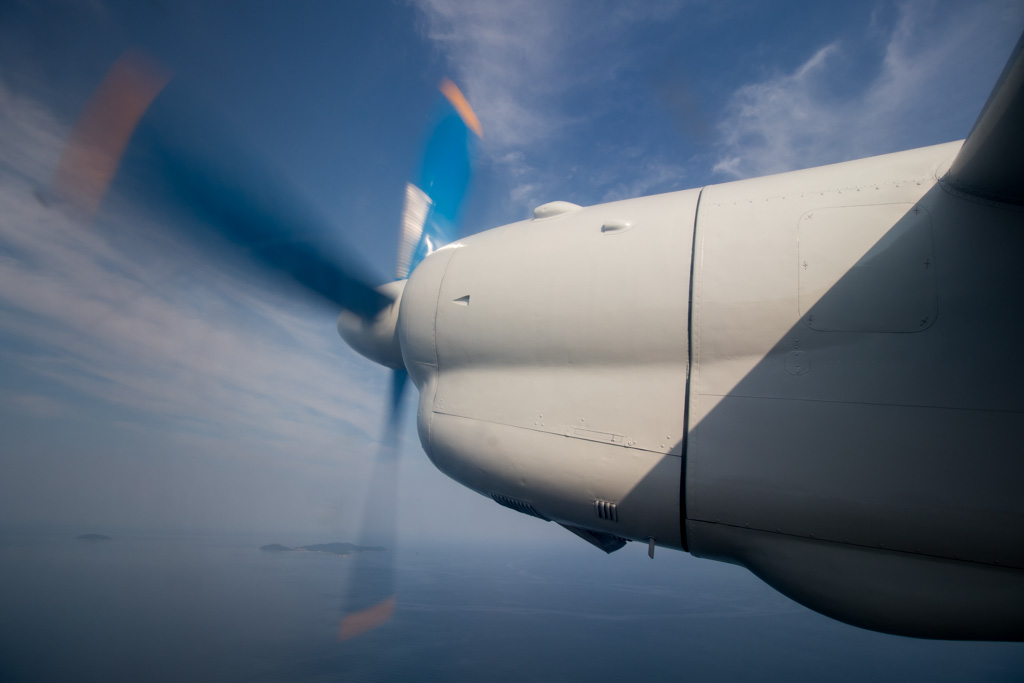 A pair of Ivchenko AI-24 turboprop engines is powering the aircraft. 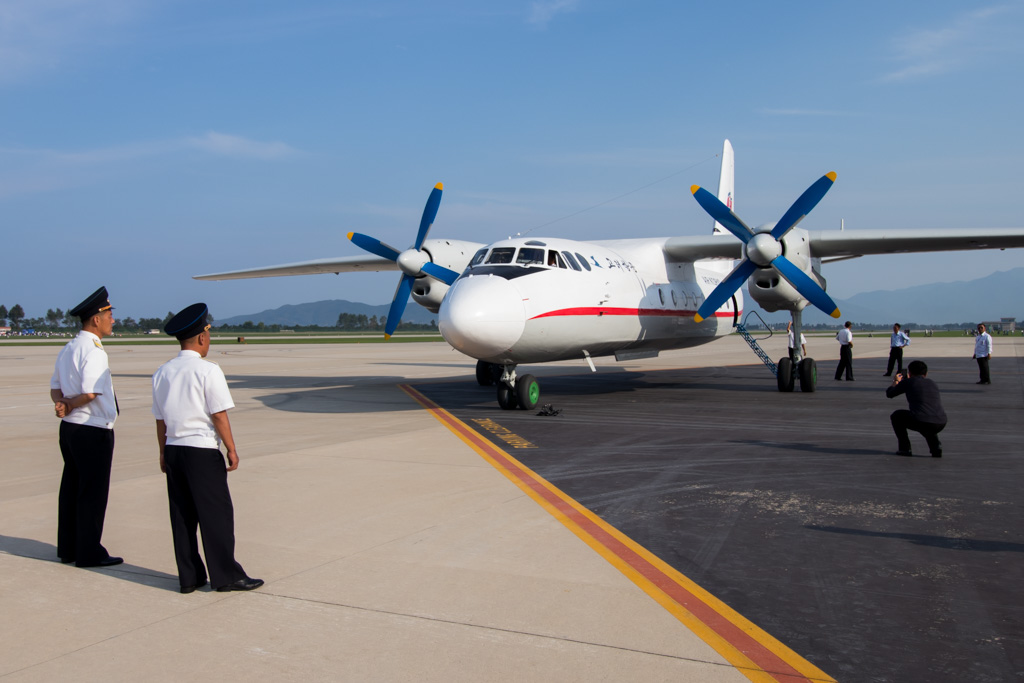 The An-24 on the Wonsan apron after arriving from its joyride.

Upon finishing its loop, the Il-18 flight landed back at 4:17PM and parked in the middle of the taxiway six minutes later. A quick visit to the cockpit followed before being ushered onto a bus to the Tu-134, my last ride of the day, which was scheduled to depart less than 20 minutes later. 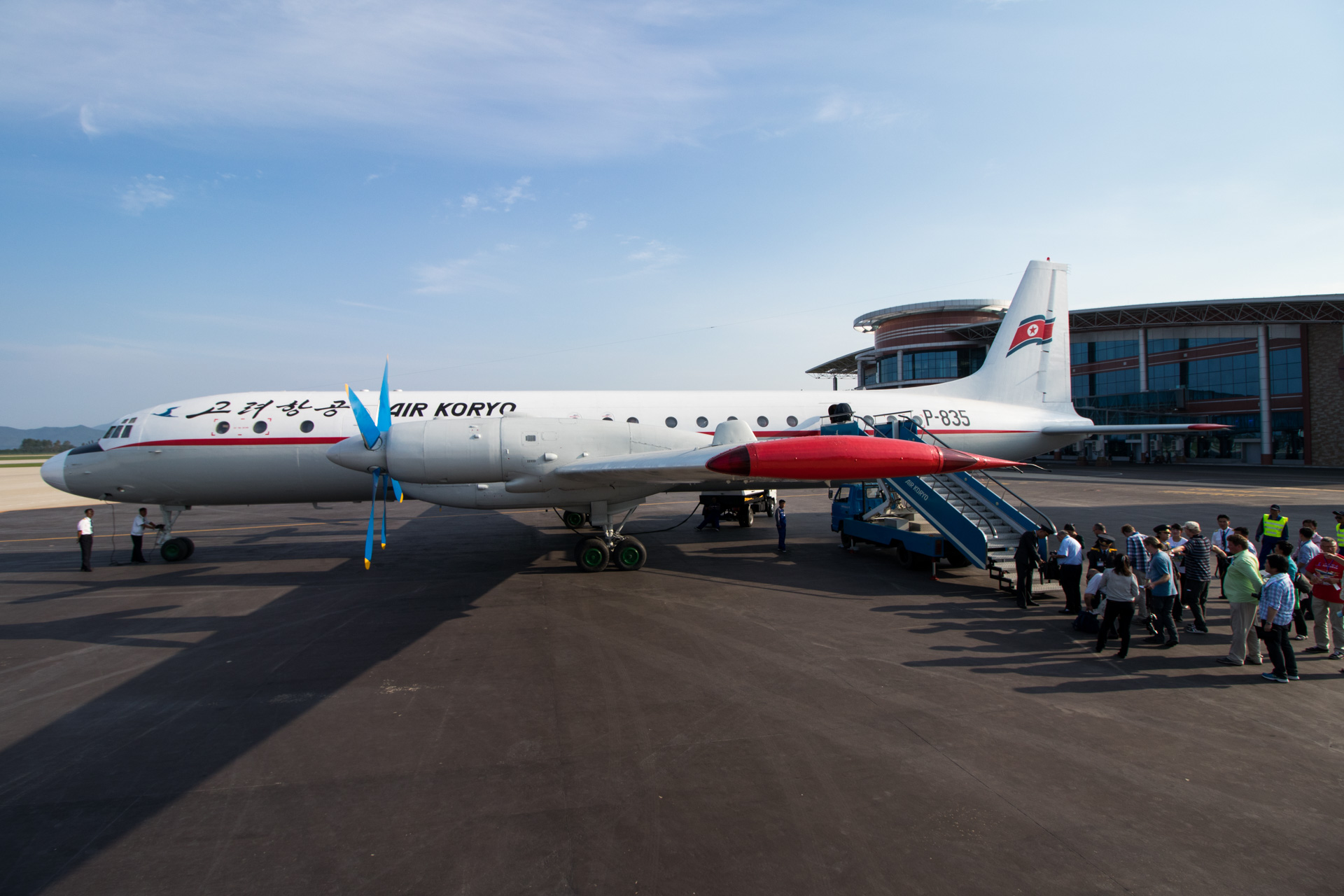 Time travel – boarding the Il-18 of Air Koryo for a joyride. 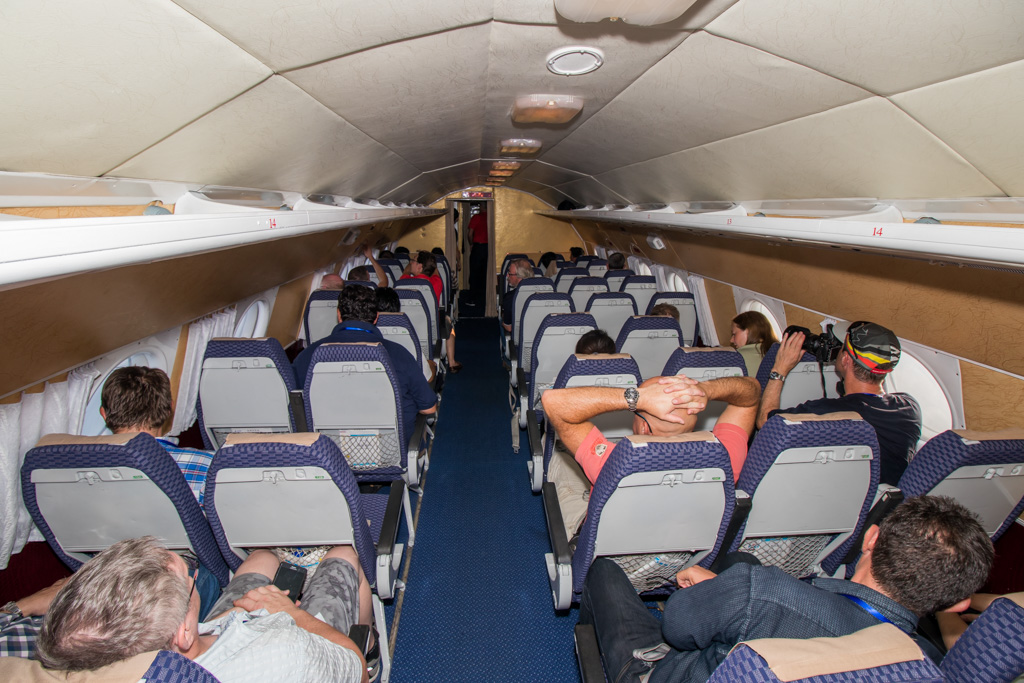 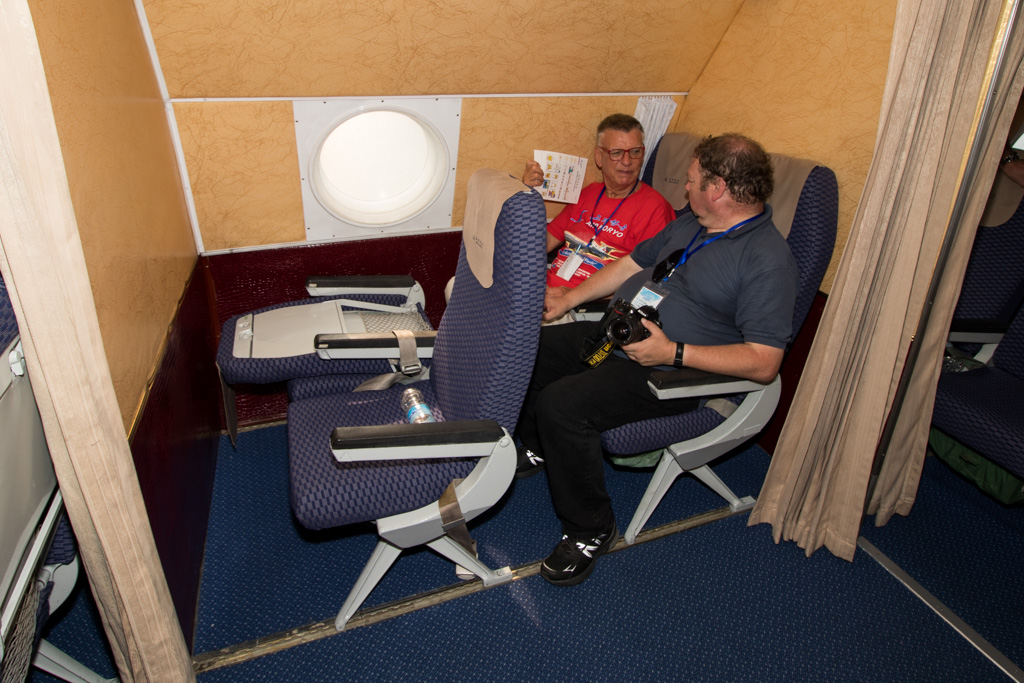 A cozy mini-cabin with just four seats in the middle of the aircraft. 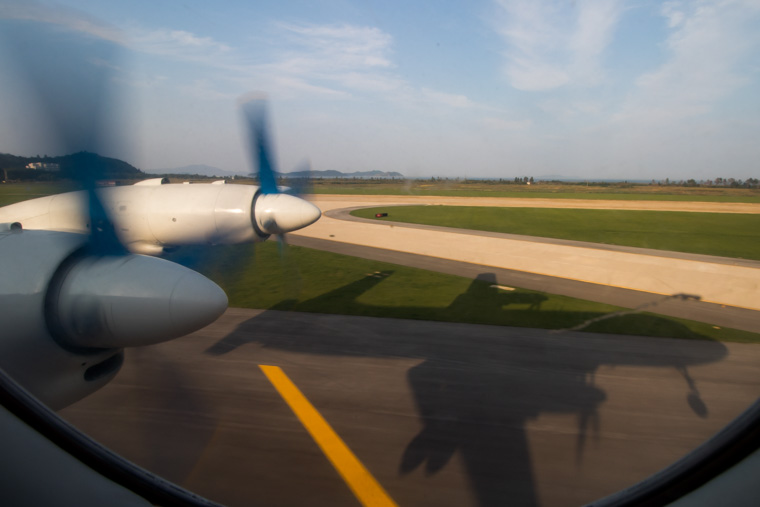 Chasing our own shadow a couple of seconds before touching down. 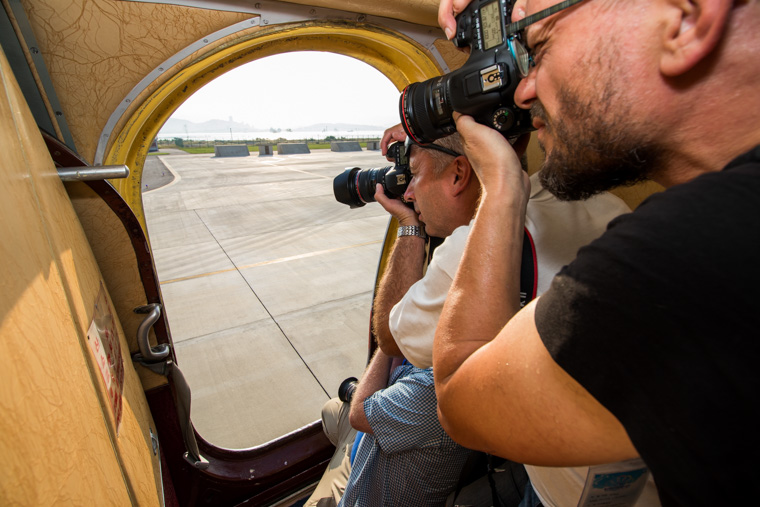 Passengers taking photos of the engines through the open door. 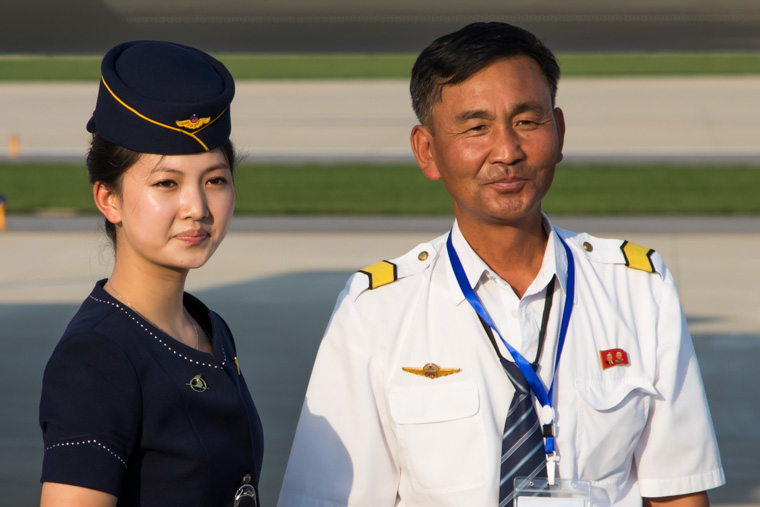 Part of the Il-18 crew on the apron after landing. 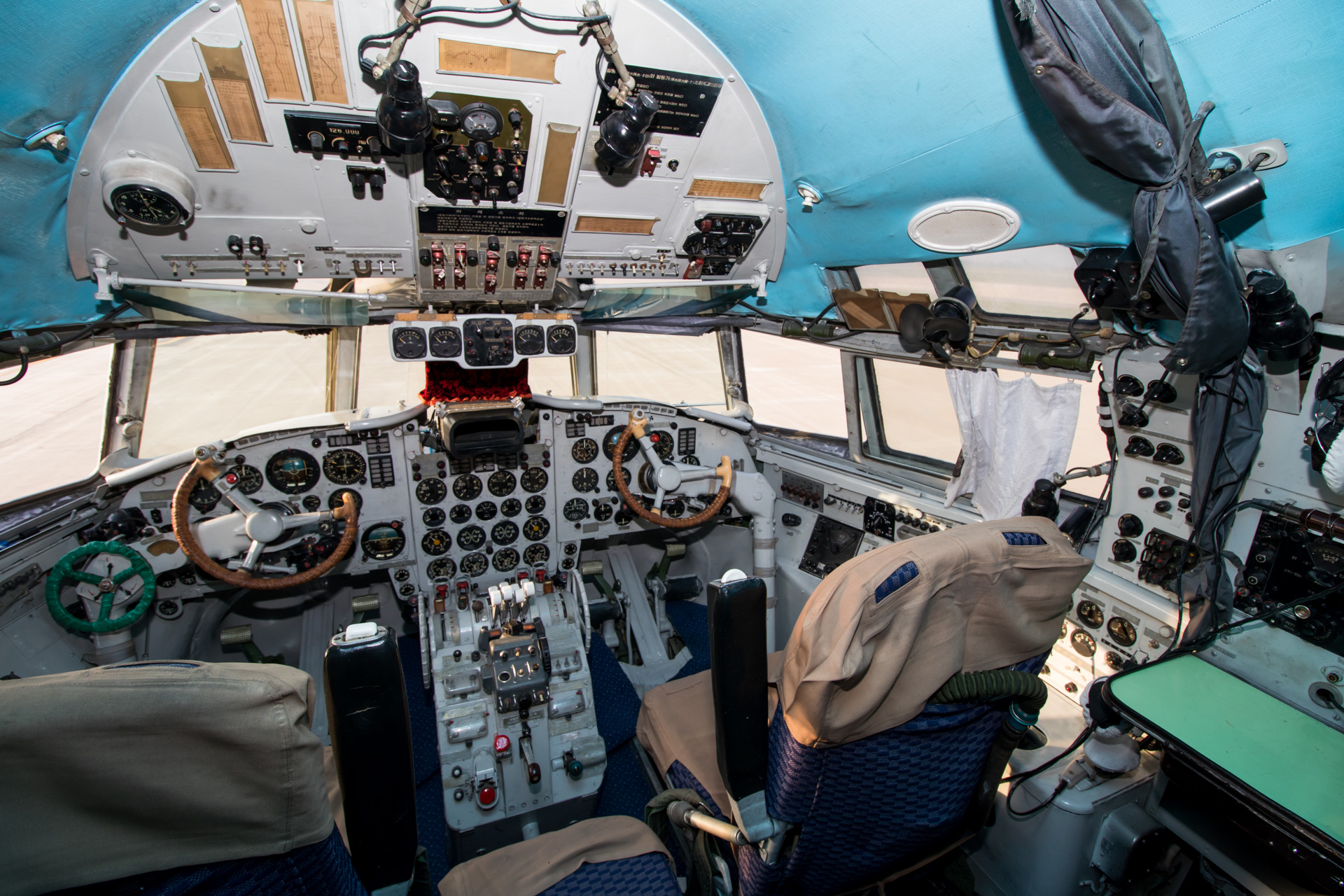 The Il-18 was the only aircraft that I managed to visit the cockpit of on the tour – and what a classic one it was!

As the Tu-134 had to carry domestic tourists back to Pyongyang after our flight, we were rushed onto the plane, and we taxied out at 4:44PM, four minutes past the scheduled departure time.

On the last flight of the day, just like with the rest of the pleasure flights I took, after departure, we headed east over the sea before making a loop and returning to the airport.

At 5:12PM, the Tu-134 touched down, and five minutes later, we arrived at the parking spot being able to enjoy a view of the sunset, the wing, the engine, and an Il-62 parked next to us before bidding the aircraft a farewell. 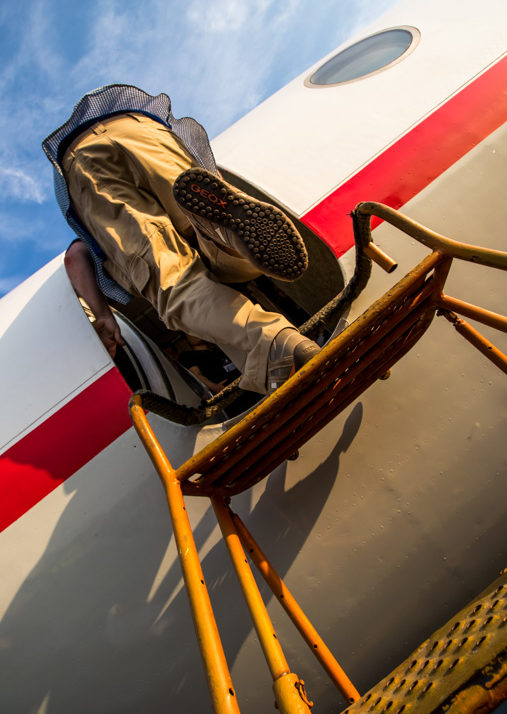 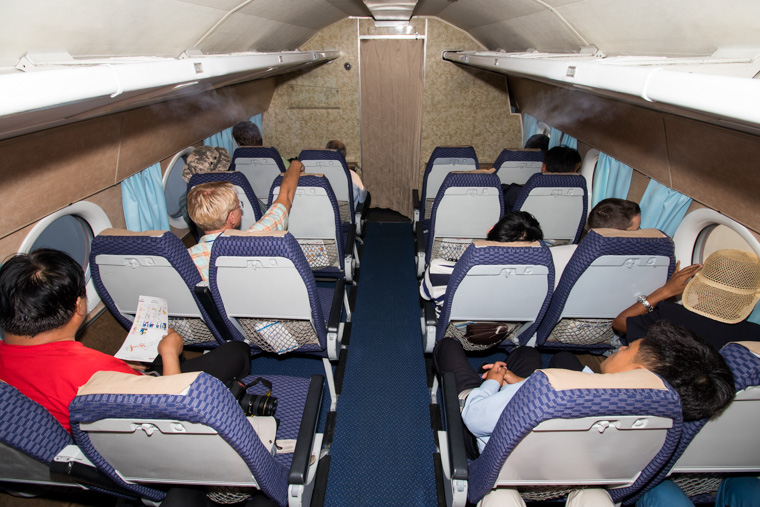 The “2-2” cabin with mist being formed from air conditioning. 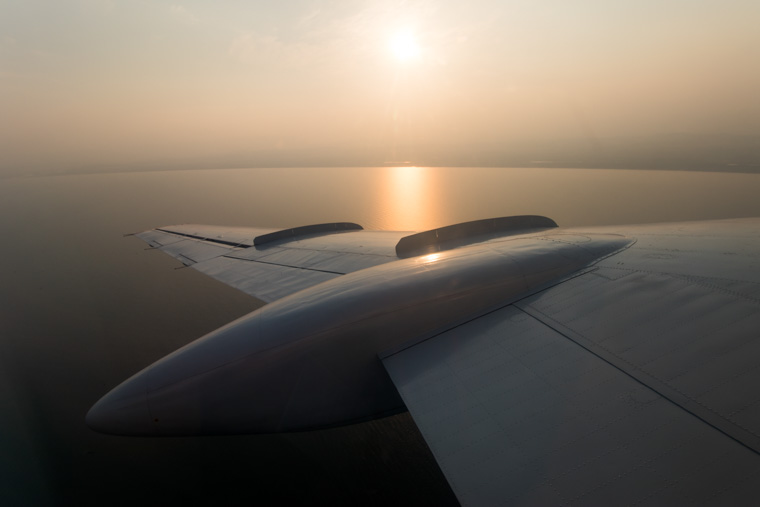 The Tu-134 joyride was the last one of the day, shortly before sunset. 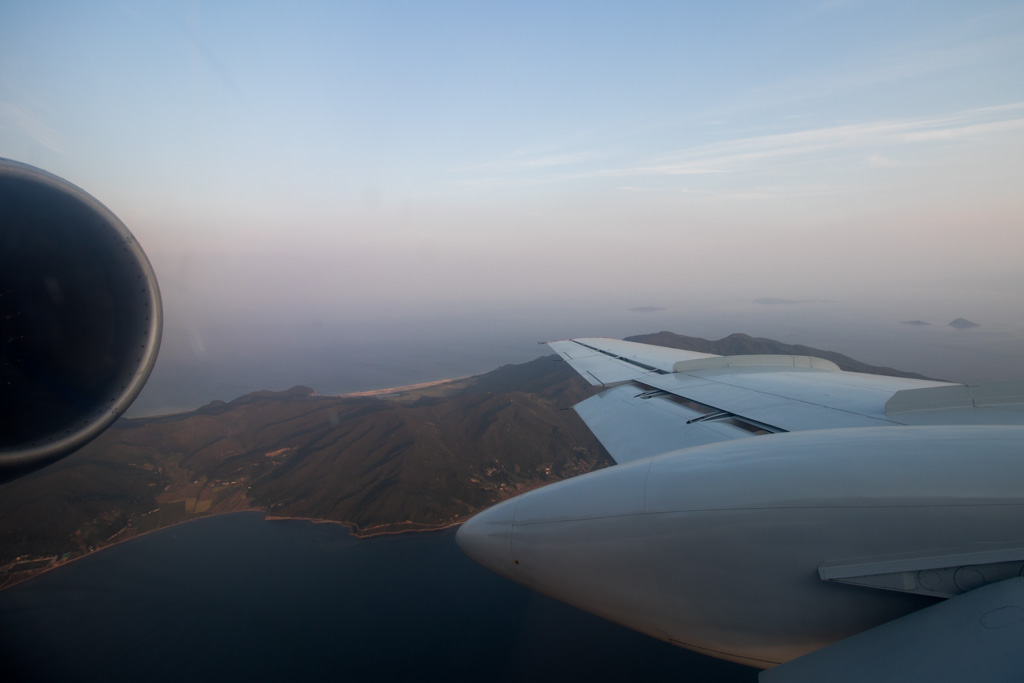 The rear rows of the aircraft offer nice view of the engine and wing. 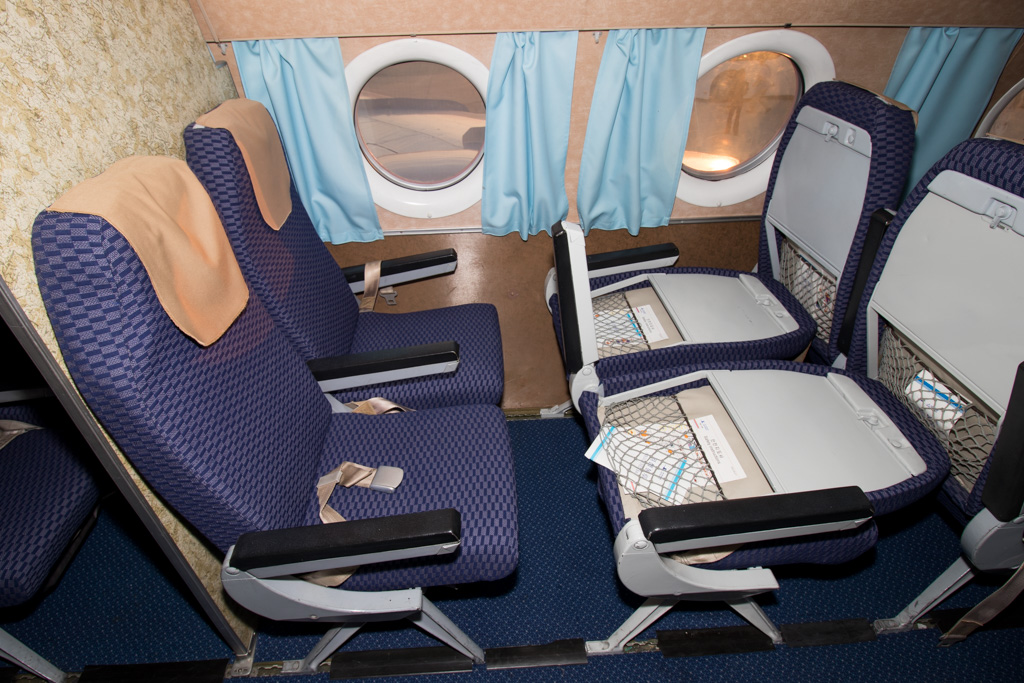 The classic Soviet cabin of the Tu-134 after landing.

The End of Wonsan Air Festival 2016

With the last flight of the day done, we watched the Il-76 depart back to Pyongyang before performing the ritual – crossing the runway – to attend the closing ceremony.

Speeches by the festival’s organizer were given once again, and the airshow was over. We crossed the runway one last time, and after a brief night shooting session of the Tu-154 and An-24, we left the airport. 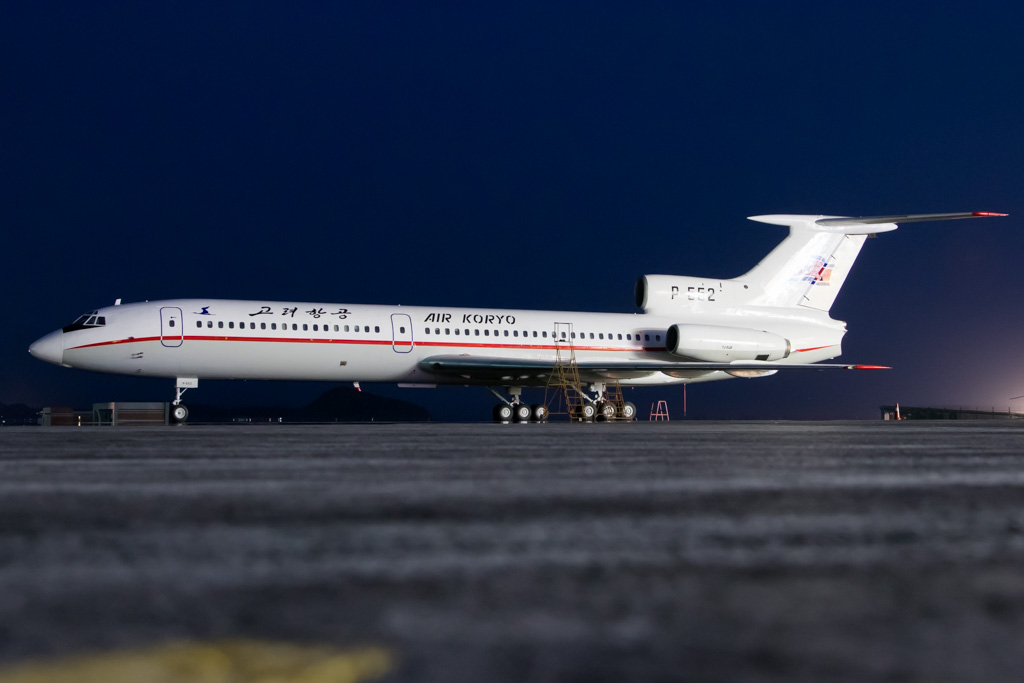 The Tu-154 resting on the dark Wonsan apron at the end of the airshow. 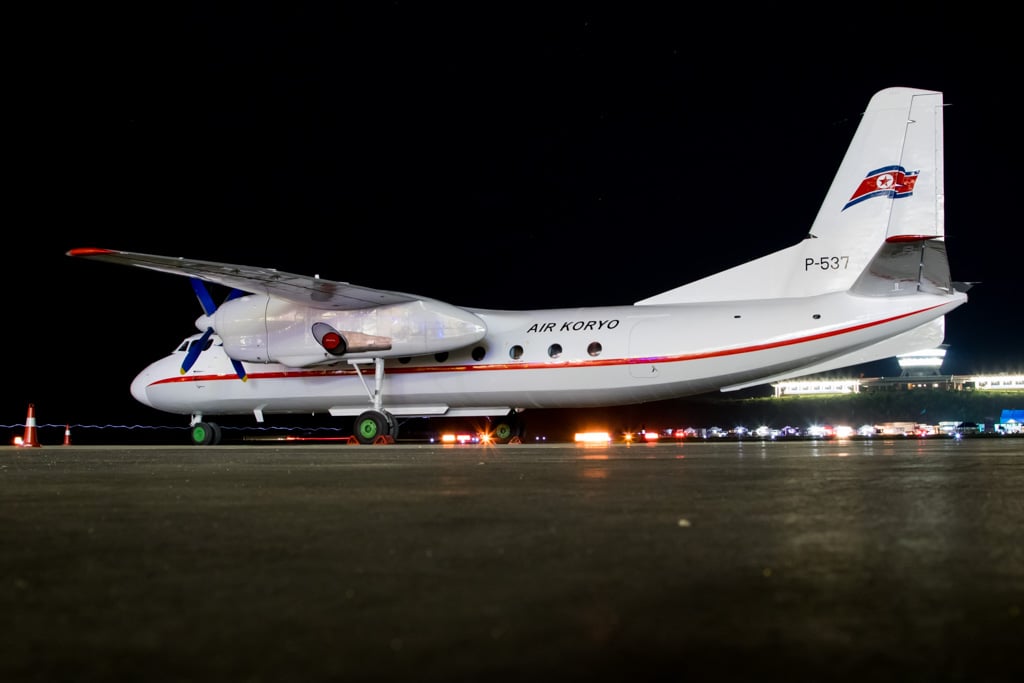 We had to “beg” our guides for “five more minutes” a couple of times during the nightshooting session.

With the airshow over, we headed to the Wonsan central square to see a mass dance. The more confident participants could also join the group of over 1,000 people and dance with the locals. Instead of dancing, together with Yukihiro, we decided to go to the very center of a couple of circles of all the people dancing to get the best possible view – quite an interesting feeling. 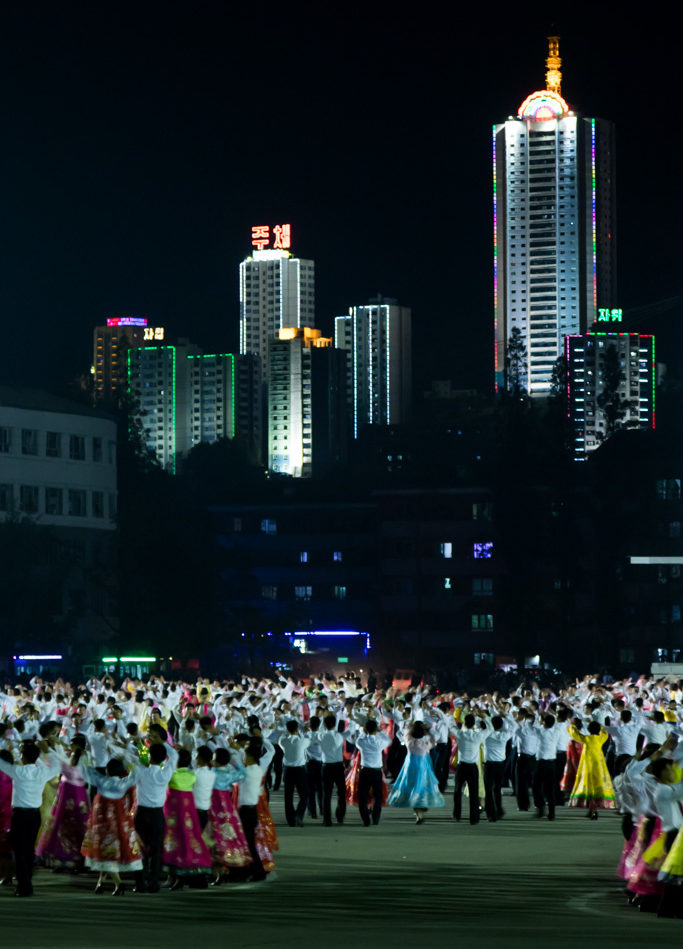 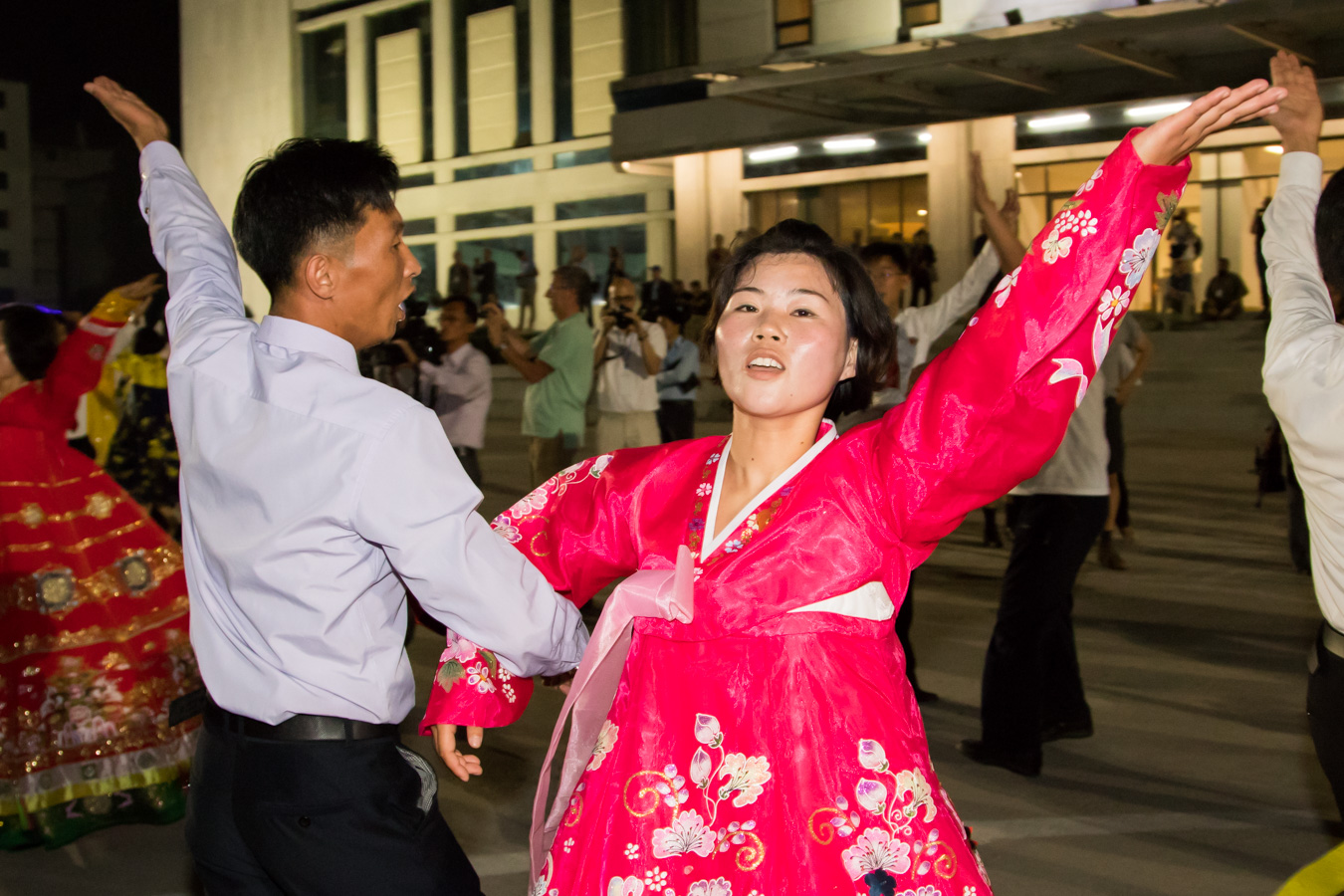 One of the many pairs of dancers on the square.

After the dance, we had a farewell dinner in a banquet hall before retreating to our beloved hotel, I mean children’s camp, for one last night.

Hi! My name is Keishi Nukina, and I am an aviation enthusiast, writer, and photographer based in Japan.

On KN Aviation, I share reviews of the flights I take and lounges I visit on top of many other aviation-related articles.

You can learn more about me here.

Are You Flying Somewhere Soon?

Are you interested in trying business or first class without breaking the bank?

If so, you might want to check out Four Ways to Try Business Class Without Breaking the Bank, and experiment with some of the methods mentioned in it.

It’s a free guide that I put together detailing some of the ways I was able to do so myself.

No, I am not going to tell you how to fly in first class and sip Dom Perignon for free…

But, I am going to introduce you to a couple of ways you can experiment with to try a business class flight without having to spend thousands of dollars.

How Can I Help You?